skip to main | skip to sidebar

It's here. The first day of school is here. It's hard to believe that Hannah is old enough. She's going on T/Th from 9-2 and is sooooooo excited. She was just about to explode this morning. Here she is in the overalls I made for her first day. 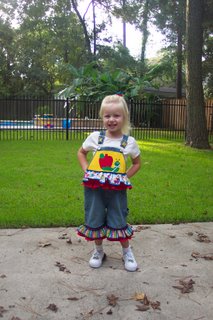 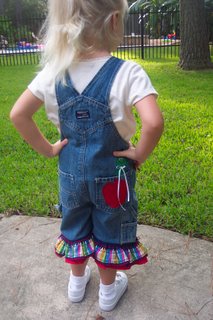 I'm gonna take a break from sewing for just a bit. I haven't done Emma's scrapbook yet and before another year has passed (has it really been a year?), I've got to do it. It's going to be an emotional project, but one that I really need to do. I can't stand not being able to open a book and look at her pictures.

Before the end of September, I'll finish the LucyBug gown and I have some flannel I want to turn into blankets. I'll probably end up doing more sewing that I realize.

Oh, and I picked up some Caron Simply Soft in orange and green yesterday to loom some pumpkin hats. See...I will be busier than I expect. :-)

Those overalls turned out very, very cute! And Hannah is such a doll! Hope she enjoyed her first day of school and you made it through too :-) They grow up way too fast.

Hannah is adorable in her new overalls! I love the ruffles.

Candy,
Thanks for the kinds words expressed about Isabella. She was the daughter of my husband's niece.
Tracy

Sponsor Me at March for Babies!

Candy
I am a stay at home mommy of 3 children....2 that I watch over and 1 that watches over me. My charity work is done in loving memory of my sweet Emma Grace. Emma was born weighing 1 lb 12 oz. She lived 2 short weeks and changed my life forever. www.emmazinggracefoundation.org "There is no foot to small that it cannot leave an imprint on this world."