skip to main | skip to sidebar

Tina's package arrived on Thurs when I was hurriedly trying to make the triplet gowns and yesterday I was too sick to post. I ended up with the stomach bug that Hannah had earlier in the week.

Anyhoo.....Tina, thanks so much for the incredible generosity. As I've said before, Emma's death has allowed me to meet some of the most thoughtful and kind people. Thank you for being one of them.

She sent 2 handmade preemie quilts given to her when she attempted to do a project like this, 4 mold kits, 5 stuffed animals, 5 crocheted caps, and a preemie drape & and cap. The preemie drape and cap was given to her when her precious Trinity died, but Trinity was too big for it. Tina has some of the cutest pictures of Trinity with a stuffed doggie. She sent one similar to it. 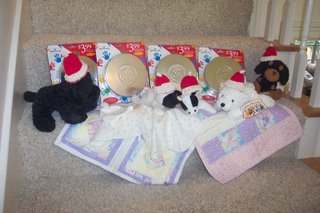 Tina also made 6 sets of special cards. They contain birth cards and "special" cards for first baths, first time held, etc. Here's an example of one. 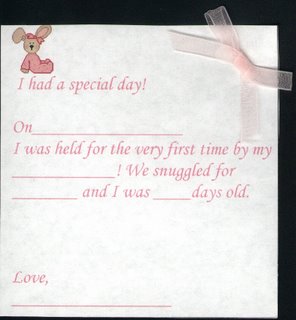 And, she didn't forget Hannah....a little ladybug, some beads, and some make-up, of which Hannah promptly dug her finger into saying, "Oooh, that's a lot." :-) 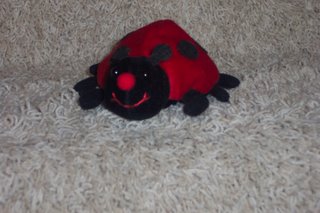 Sponsor Me at March for Babies!

Candy
I am a stay at home mommy of 3 children....2 that I watch over and 1 that watches over me. My charity work is done in loving memory of my sweet Emma Grace. Emma was born weighing 1 lb 12 oz. She lived 2 short weeks and changed my life forever. www.emmazinggracefoundation.org "There is no foot to small that it cannot leave an imprint on this world."